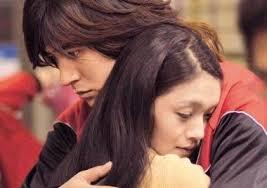 Mars is a Taiwanese drama that aired in 2004, starring Vic Zhou and Barbie Hsu as star-crossed lovers who meet at college. The series is based on a fifteen-volume Japanese Shojo manga. It won the 2005 Drama Of the Year at the 40th Annual Golden Bell Awards in Taiwan.
Advertisement:

Chen Ling is a casual guy who dreams of racing motorcycles in the World Grand Prix series, but was also recently released from a mental institution after seeing his identical twin brother commit suicide. Han Qi Luo is a shy art student traumatized by events in her past. Together they face the obstacles of everyday life as their love grows.

This series contains the following examples: