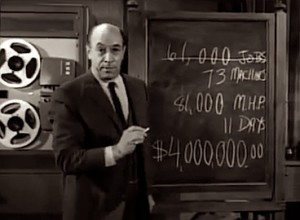 Whipple displays his plan to save money by replacing the workers.

Rod Serling: These are the players, with or without a scorecard: in one corner, a machine; in the other, one Wallace V. Whipple, man. And the game? It happens to be the historical battle between flesh and steel, between the brain of man and the product of man's brain. We don't make book on this one and predict no winner, but we can tell you that, for this particular contest, there is standing room only in the Twilight Zone.

In 1967, Wallace V. Whipple, owner of a vast manufacturing corporation, decides to upgrade his plant to increase output by installing a machine named the "X109B14 modified transistorized totally automated machine", which leads to layoffs as more and more employees are replaced by robots or computers. Some former employees try to convince him that the value of a man outweighs the value of a machine, but their protests fall on deaf ears.

Eventually, the board of directors find him neurotically obsessed with machines and retire him. Whipple joins his former plant manager, replaced by another computer earlier, at the bar opposite his factory and expresses deep sorrow at his misfortune ("It isn't fair, Hanley! It isn't fair the way they...diminish us"), now that a robot runs his office.

Rod Serling: There are many bromides applicable here — too much of a good thing; tiger by the tail; as ye sow, so shall ye reap. The point is that too often, man becomes clever instead of becoming wise, he becomes inventive but not thoughtful — and sometimes, as in the case of Mr. Whipple, he can create himself right out of existence. Tonight's tale of oddness and obsolescence from the Twilight Zone.

The Trope Center at Whipples: