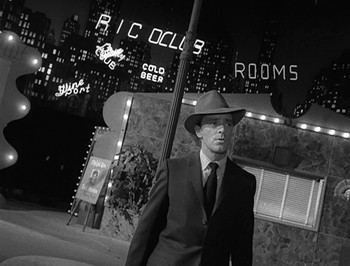 "I just need a little more time!"
Rod Serling: His name is Arch Hammer. He's thirty-six years old. He's been a salesman, a dispatcher, a truck driver, a con man, a bookie, and a part-time bartender. This is a cheap man, a nickel and dime man, with a cheapness that goes past the suit and the shirt; a cheapness of mind, a cheapness of taste, a tawdry little shine on the seat of his conscience, and a dark room squint at a world whose sunlight has never gotten through to him. But Mr. Hammer has a talent, discovered at a very early age. This much he does have. He can make his face change. He can twitch a muscle, move a jaw, concentrate on the cast of his eyes, and he can change his face. He can change it into anything he wants. Mr. Archie Hammer, jack of all trades, has just checked in a three-eighty a night, with two bags, some newspaper clippings, a most odd talent, and a master plan to destroy some lives.

A man called Arch Hammer (Harry Townes) has a special talent—he can change his face to fit the appearance of any man he sees. First of all, he takes the image of a murdered trumpet player, Johnny Foster (Ross Martin), in order to steal his girlfriend Maggie (Beverly Garland). To cover the finances, he impersonates Virgil Sterig (Philip Pine), a dead gangster, and demands money from the mob member who put the hit on him. After Hammer leaves, the gangster sends two men after him. To evade them, Hammer changes his face yet again so that he now resembles Andy Marshak (Don Gordon), a boxer. However, as he emerges from the alley, he meets Marshak's father (Peter Brocco), who is none too pleased with the things his 'son' did...and a later encounter will teach Hammer that this business is not all it's cracked up to be.

Rod Serling: He was Arch Hammer, a cheap little man who just checked in. He was Johnny Foster, who played a trumpet and was loved beyond words. He was Virgil Sterig, with money in his pocket. He was Andy Marshak, who got some of his agony back on a sidewalk in front of a cheap hotel. Hammer, Foster, Sterig, Marshak, and all four of them were dying.

The Four of Us Are Troping: