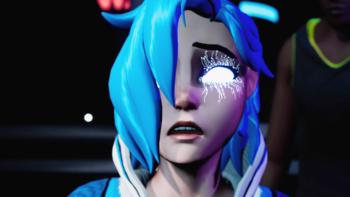 The Season One finale to Meta Runner. Unmarked spoilers ahead!

Tari isn't exactly in a desirable position right now. The rest of her MD-5 teammates have been eliminated, and she's currently incapacitated by Belle, who's going against Lucks' orders to force Tari to tell her what she did to Lucinia... despite the fact Tari basically has no idea who Lucinia is. Can Tari escape Belle and execute the Deep Mountain Clip? And even if she does, will MD-5 be able to escape the arena so easily?