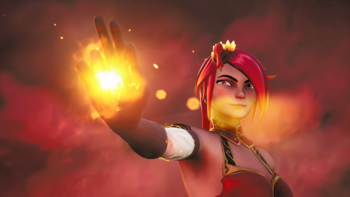 "You always were so stubborn, Masa. Only problem is... SO AM I!"
Stakes are high as Tari and MD-5 make their way up The Mountain in Tempest. Will they be able to defeat this group of mysterious assailants in time to execute the glitch?
Advertisement:

The battle continues between MD-5 and the elite squad - who turns out is led by Belle, who is also at the tournament after Lucks has somehow discovered MD-5's plans. Can MD-5 fight off Belle and her goons and make it to the top of the mountain to execute the Deep Mountain Clip?