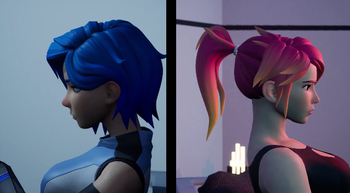 ”I’ll figure something out. I promise.”
Meta Runner Season 2 is here. Taking place six months after the shocking events of Season 1, we catch up on what everyone is up to.
Advertisement:

UNMARKED SPOILERS FOR “SHUTDOWN” AHEAD!

Six months have passed since the underground Tempest tournament, when Tari gave herself up to Lucks and TASCorp in order to let MD-5 walk away, defeated, and Theo ended up in limbo with his life dependent of the former two keeping up their ends of the deal. This episode reveals what has become of them.