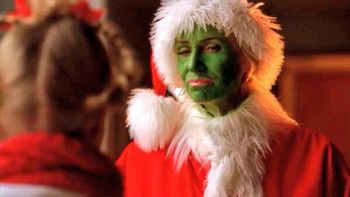 Every Gleek in the glee club liked Christmas a lot, but Sue Sylvester, office just north of the choir room, did not...
Advertisement:

We start the season 2 Christmas Episode with Will in the lounge as Emma approaches, asking if the two of them are okay on account of her getting married as it seems Will has been in no way avoiding her. Emma asks about Will's plans and not surprisingly, he plans on being alone. Ask a stupid question, Emma... Emma, apparently realizes it and, despite the inevitable awkwardness, invites him to her and Carl's Christmas party. Will, not wanting to indulge in holiday masochism, declines. Beiste arrives with a tub full of names for a Secret Santa, everybody immediately reacting negatively to the name they pulled as Will pulls out the name of the Lycra Lord because of course. Cut to Brittany and Artie decorating his locker, Brittany cuing a non-sequitur of leaving a stocking up and mice getting into it. Artie, being a simple man, simply wants a gift of his parents to stop leaving friend requests. Brittany, as you'd expect, asks what Artie asked Santa for. Artie sits stunned that she still believes, although that really should surprise no one. Neither should this holiday tinted Title Card. 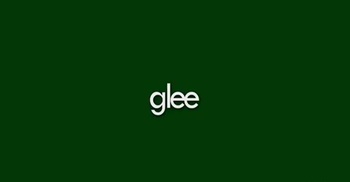 Cut to the choir room where New Directions are putting up the tree while getting their Rudolph on; specifically, the song talking about the "Island of Unwanted Toys", how apropos. We even see Rachel, and yes, her Judaism becomes an Informed Attribute for these purposes. Afterwards, Will arrives and we hit the Mood Whiplash: Finn found the tree on the side of the road, Santana took the ornaments from her neighbors house after the resident offed his mother, while Noah took display boxes from a mall display. Gets you into the spirit doesn't it? Mercedes calls the tree a mascot, citing how despite two Sectionals wins, they're still pariahs. We cut to Mike, Tina and Mercedes coming across the resident letterman clad grinches and coming away with rosy cheeks full of food coloring added to what Mike is sure is parking lot slush for evidence. Will tries to peptalk, saying ND's gonna raise money for a shelter full of homeless kids... and to raise money, they're caroling to each classroom. Let's see; having the social pariahs of McKinley singing to each classroom. Will, heart's in the right place, but you're an idiot. We soon see how much of an idiot he is; ND (and the band too? Locke and Henson deserve twice the pay for this) tries but gets a teacher's shoe thrown at them (Murphy clearly going for Comedic Sociopathy), paper (not money) thrown at them, and how dare you do this Hairgel! Cut back to the choir room where ND recovers, Finn trying to rally for another go, while Brittany says she asked Santa for ND to stop being abused. As this goes on, Rachel, finding an opportunity to try for a reconciliation, asks Finn to meet her in the auditorium, while Artie says Brittany still believes and no one is to tell her otherwise.

As part of this plan, we return after the break to the local mall where ND comes across the resident Mall Santa. It's all going well, ND members asking for things like Chap Stick, for Channing Tatum to stop being in stuff, for Rachel to love her... wait, that last one didn't happen? Huh. Then it's Brittany's turn. See, Brittany, as we've established, as a sweet girl. And as such, she thinks that nothing's impossible. Therefore, instead of say, wishing Santana would love her, as she knows that would only make things worse for the moment, she instead tries for something more simple. Say... reversing the effects of a car accident. Yes, she points right at Artie so everyone is listening when she asks for him to be able to walk again. Cue collective Oh, Crap!. Artie immediately tries to signal to let her down easy, but Mall Santa, likely just not caring, says he'll make it come true. West Lima Mall Santa, you're an idiot. And a jackass.

Cut to the auditorium full of fake foliage, where Finn immediately figures Rachel's false folly, namely an attempted serenade. He bails leaving Rachel to vent sorrow in standard fashion. An Internal Homage will be made to this with Marley and Sue two seasons later. Cut to Will trying to come up with ideas for Sue's present, citing a dog robot and a soul for options. Dog robot's cheaper. He's frustrated as we cut to Dalton and an equally frustrated Kurt. Fortunately, Marley's ghost is here to get him to take a break, asking him to rehearse a duet with him that he must perform at Kings Island's

Christmas Spectacular. Kurt agrees and we go into everyone's favorite unintentionally creepy Christmas song. This also starts an annual tradition of a Klaine duet every Christmas. Afterwards, Will arrives on enemy turf to see Kurt. He asks Kurt if that was his boyfriend as Blaine is leaving; Kurt says no but he's working on it. Will asks for help; seems he's bad at Christmas shopping; we cut to (dear god why) Terri getting a present of jumper cables. They won't work on a soul though, that rotted away years ago. Cut back to Kurt with the perfect idea. However, it seems all is not as it seems; as Emma walks towards Sue's office Will walks along side, then joined by Beiste and yes gleeks, you guessed it: Sue stuffed the hat and got all the goods. Naturally, the non-Sue faculty will not stand for it, calling her a Grinch and removing the presents to be given to the homeless kids. Sue, engorged with venom and humbug, will not take this challenge lying down oh no no no. As she looks down to see a Zizes-confiscated Santa hat, we see the electrons within the eyes fire up.

Cut to the locker room where, citing a similar body type, the ND men ask Beiste to put a Santa suit on and convince Brittany Santa can't make Artie walk. To do this, she must head to Brittany's house and act like she came down the chimney. Beiste agrees as we cut to Becky handing Sue some gloves.

And here's where we get to indulge in some classic literature. See, while the term "Grinch" is usually just a Christmas themed insult, the above picture serves as evidence of it taken to its logical conclusion. Yes, Virginia, we are going into a Shot-for-Shot Remake of How the Grinch Stole Christmas!. Now, we have Sue Sylvester as the title character, Rebecca Jackson as Max the Rein-Dog, and playing the role of Cindy Lou Who? Three guesses Gleeks, and the first two don't count. Yes, one Brittany Susan Pierce herself, and to make the sequence complete, the dialogue is the text from the Dr. Seuss book nearly word-for-word, swapping out when appropriate. All this set to the appropriate theme song. Sue goes to steal the gifts from the choir and Brittany, finds her but thinks that she's Santa. Hilarity Ensues, with Sue telling Brittany that she's just going to fix the tree. Brittany trusts her, and hands over the present she was going to put under the tree. Sue leaves with her usual venom and triumph, the tree and decorations totaled in the process.

Cut to ND in the debris, Will arriving to see the destruction. Rachel accuses the usual suspects, but Will of course knows the guilty party. Brittany, serenely explains that it was Santa while Artie manages to get his sign language working enough this time to make sure that everyone agrees. Finn, tapping into something rarely seen, tells everyone that they shouldn't be sad about it because way worse things happen all the time to other people around the world. Rachel, seeing a reminder why she fucked up (and let it be known that Finn can be a decent human. Sadly those are the rarest of occasions, and next season will solidify that), senses another opportunity to try and get back with him, hiding her true intentions behind the guise of unity for New Directions. Cut to a tree lot where Finchel ostensibly is there to try and find a tree. We hit the duet, and kissing ensues; unfortunately for Rachel, Finn may be ignorant, but not completely stupid (for now at least), as he finds out the true intentions and tells Rachel off, leaving her alone in the tree yard.

Cut to ND at a charity based Despair Event Horizon; seems the men are prepping to sell their watches, while the women prepare for shaved craniums. Will arrives to calm everyone down, quoting "Gift of The Magi" by saying that the first Christmas one remembers is the greatest day of their life. Then you grow up and it's an obligation; eventually you'd do anything to get it back. Will then says ND'll find people who need the spirit. And now we cut to Brittany's room, where she's tucking her dolls in before she hears bells. Cut to her living room where she spots Santa Beiste. And here's where we find out what Heather Morris can do, as Beiste tells her that "Santa" tried, but "he" just can't make Artie walk. HeMo produces a face that could make puppies cry. Cut to Brit-Brit taking the decorations out of her locker as Artie approaches. She laments about how she thought Santa could do anything, and that it's not fair that he can't walk. Will arrives to summon the two of them into the lounge, but Artie decides to opt both of them out. In the lounge, we see ND assembled. Seems that if singing to the students didn't work, maybe singing to the teachers would. We then cut to Sue's office where she gloats. However, and really after nearly a season and a half you'd think she'd realize this by now, what won't kill ND makes them stronger, as she hears the harmony. While the faculty donates (yes, even eternal cheapskate Figgins), Sue pokes her head into the lounge; seeing that ND are still going around all... gleeful, she decides that their perseverance, optimism or idiotic delusion is really quite touching. Her heart... well, it at least grows a size and a half that day.

We start the holiday home stretch with Puck announcing the take of $210, while both Rachel and Will lament their lonely statuses. However, this is followed by a sudden shock, as ND enter the choir room aghast. Seems that Beiste, after feeling horrible about Brittany, decided to try and make it up to her. Thus, she produces a device called a "Re-Walk"; yes, this is a real device that stimulates dormant nerves in paralyzed areas, enough to get Artie out of the chair and to reinforce Brittany's belief. And from one miracle to another, we cut to Will arriving home to find Sue... the ND tree and all the gifts. Sue being Sue, she also gives Will a Flobee, then reveals that she didn't decorate the tree alone; this of course brings out ND to end the episode on a good note by making sure no one is alone on Christmas. Glee bless us everyone.

Next time: We ain't here, to cause no trouble, we're just here to do the Sue Sylvester Shuffle.