Castlevania is a fantasy web-animated series based on the video game franchise's third installment, revolving around a drunkard, a sorcerer and a vampire-human hybrid attempting to end the terror of Count Dracula. The show was released on Netflix from 2017 to 2021. 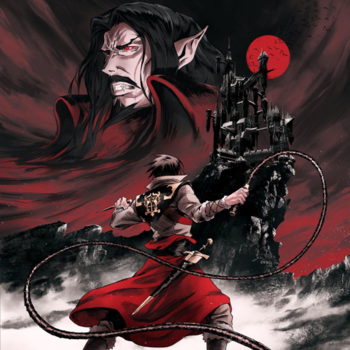 In darkness, a hero returns.
"My father has to die. We three...we can defeat him."
— Alucard

After the death of his beloved wife Lisa, the vampire lord Vlad Dracula Tepes declares war on humanity. As darkness falls upon Wallachia, three heroes will arise to bring salvation: Trevor Belmont, the last of a clan of vampire hunters; Sypha Belnades, a quick-witted magician; and Adrian "Alucard" Tepes, Dracula's half-vampiric son. 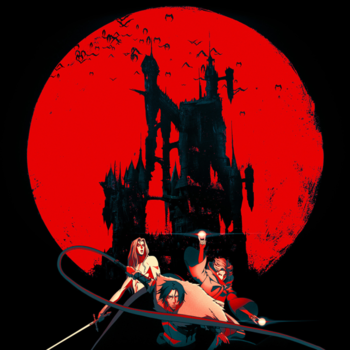 Blood will seek blood.
"My generals, we prosecute a good war. In killing my wife, humanity has proven to me that they don't deserve Wallachia."
— Dracula

Trevor, Sypha, and Alucard join forces to find a way to defeat Dracula and end his plan to wipe the human race from the face of the earth. At the same time, insurrection brews within the ranks of Dracula's war council as the ambitious Carmilla plots to overthrow her leader and take the reigns of the vampiric army for herself. 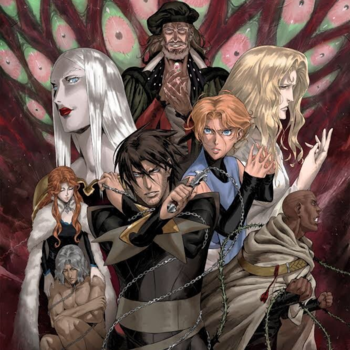 With Dracula dead, Trevor and Sypha part ways with Alucard and embark on an adventure of their own, one that finds them in a peculiar small town where Dracula's apostles plan to bring him back to life. As Alucard befriends a pair of young vampire hunters-in-training, Carmilla advances her own plans for conquest. 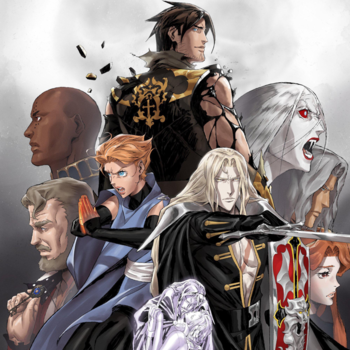 These are the end times.
"It's time to give this place back to people who know how to build things! You and me, we're just killers out of history...it's time for us to go!"
— Trevor

Trevor and Sypha's travels lead them to the site where Dracula's wife was murdered and his war with humanity began, Alucard aids a group of villagers against monsters while struggling to find his own humanity, Carmilla's plans for global conquest are put into motion, and a dark conspiracy brews to once again attempt Dracula's revival.