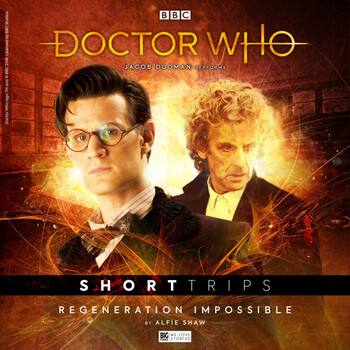 A story for the Eleventh and Twelfth Doctors. Written by Alfie Shaw, and read by Jacob Dudman.

The Doctor is retired, living out his days in the clouds above Victorian London, not interfering no matter how much his friends try. Until the TARDIS detects something that should not exist. Regeneration energy. Unable to resist, he sets out to meet this mysterious other Time Lord. After all, it can't be him. He knows his past, and more pressingly, he knows he's on his last life.

Which makes it all the more surprising when the other Time Lord calls himself the Doctor.

The Twelfth Doctor, lecturing at St Luke's University, was lured into the trap when someone posted an authentic photo of a dead student under his door, taken in Victorian London. Now, he's regenerating over and over, but instead of him changing bodies, the corpse on the slab changed instead. Switching between the faces of his students.

The two Doctors bicker, belittle, and generally act like it's a multi-Doctor story, as the killer phones up and taunts them. Eventually, much to Twelve's chagrin, Eleven is able to figure it out. He never tends to hang around for long, as it attracts too much attention, yet that's just what Twelve is doing. Twelve counters that he's been stuck on Earth before, but this time, it's unique - he has both regenerations available, and a functioning TARDIS.

The corpse on the slab reveals himself as the orchestrater of the trap, one of the surviving vampires, aiming to complete what the Time War started, and kill the Doctor as revenge for their own wars on his people. In addition, draining Twelve's regeneration energy will allow him to survive any injury, combining with his own unaging state to make him effectively immortal. With Twelve out of commission, Eleven to teleports them both (using the vampire's Time Ring) to the desert, weakening the vampire, before teleporting back. When the vampire returns, Eleven reverses the process, which he admits will probably kill the vampire - that's what he gets for trying to kill them, rather than asking for help. The shock of conducting so much regeneration energy in turn knocks Eleven out, wiping his memory, and Twelve is forced to take him home, before returning to the future.