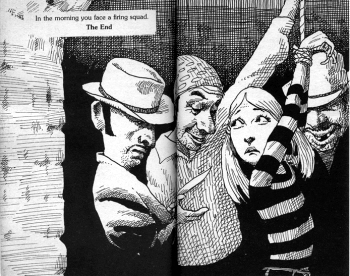 The entire gamebook genre is so well known for Nightmare Fuel that entire series such as Give Yourself Goosebumps and Choose Your Own Nightmare were created to capitalize on it. Most of the time, the nightmare fuel comes from the endings where your character dies or meets a Fate Worse than Death. Entire blogs and websites, such as You Chose Wrong

and Lose Your Own Adventure

have been created to showcase some of the worst endings across the genre. This blog

features a healthy dose of nightmarish illustrations from the Choose Your Own Adventure series.