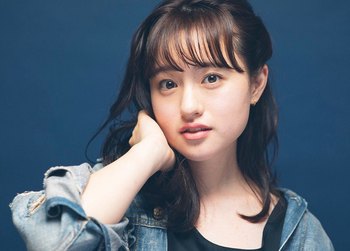 Ayami Muto (武藤彩未 – born April 29th 1996) is a Japanese singer, model, former Idol, as well as the original leader of both Karen Girl's and Sakura Gakuin. She is signed to Tsubasa Production for management and Shinkai for her music.

She started her career as a kid-model, signing with Amuse in 2004 and spending several years featuring in commercials for Ciào Magazine before being chosen as one of the Karen Girl's – a gimmick of sorts to help promote the Animated Adaptation of the popular comic – along with Suzuka Nakamoto (of later Babymetal fame) and Yuika Shima. There, she discovered her love of singing. After Karen Girl's was dissolved following the conclusion of the anime, she continued to star in commercials until she was recruited as a founding member of Sakura Gakuin, where she served as the first Student Council President, a role she would pass down to fellow Karen Girl's and SG member Suzuka.

After aging out of Sakura Gakuin in 2012, she embarked upon a solo singing career, releasing several well-received singles, albums, and live shows. However, for reasons unknown to the outside, she abruptly left Amuse at the end of 2015. Not long after that, she left Japan entirely and moved to New Zealand, promising she would return one day. She did so at the end of 2018 and soon restarted her singing career, this time with more input into her songs and improved English ability.

Ayami is known for her crystal-clear voice, near-perfect comic timing, and for being hilariously petite, standing just 149cm tall (that's just over 4’10½”). The latter is likely due to coming from a family of racehorse jockeys & trainers. She occasionally appears on horse racing broadcasts in Japan due to her knowledge of the sport. She's also quite possibly the biggest Seiko Matsuda fan on the planet and has intentionally tried to fashion herself in Seiko's image.

Tropes Applying to Ayami Muto and/or Her Music