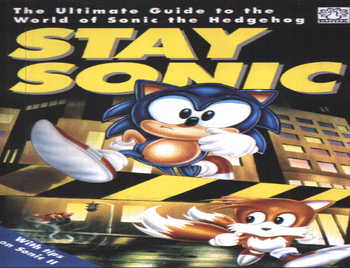 Stay Sonic is a 1993 guidebook to Sonic the Hedgehog. It is based on Sega of Europe's interpretation of the series.

Stay Sonic features a history section based on the backstory given in the American comic Sonic the Hedgehog Promo Comic. Both come from Sega of America's internal "Sonic Bible" documents. This backstory was dropped in American media such as Sonic Sat AM and Archie Comics' Sonic the Hedgehog and was never canon in Japan, but it used extensively in European media until Sonic Adventure.

Sonic Says also includes various other tidbite such as a Sonic quiz, a diagram of Robotnik's Eggmobile, descriptions of the badniks of Sonic the Hedgehog 2, tips on how to play the game.

Nigel Kitching, one of the lead writers of Fleetway's Sonic the Comic, owned a copy of Stay Sonic and used it as a basis for the lore of the comic.