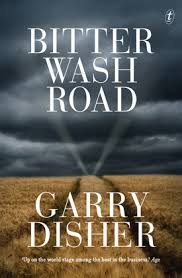 Bitter Wash Road is an Australian crime thriller written in 2013. It follows Constable Paul Hirschausen (known by most as Hirsch) at his posting in rural South Australia. He was transferred there after reluctantly whistle-blowing on the corruption at his previous metropolitan posting, and now he’s hated by his new and old colleagues alike and received threats in the post, up to and including a pistol cartridge in a mailbox. When he’s sent to investigate shots at Bitter Wash Road, he fully expects to get shot by his back-up.

This doesn’t happen, though: the shots merely come from the local kids doing target practice. On his way back, however, he discovers the body of a local girl named Melia Donovan. She’s been ran over, with no known suspect. He gets back to the station to discover that someone has put a phone and a large sum of money inside his private car, ostensibly in order to smear him...