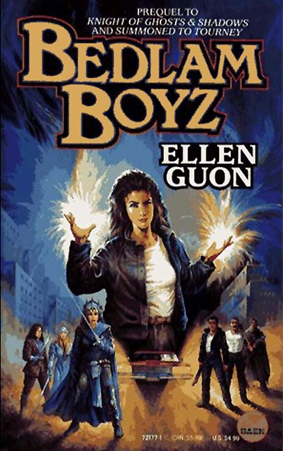 Bedlam Boyz Is an Urban Fantasy novel by Ellen Guon Beeman, published in 1993 by Baen Books. Prequel to Knights of Ghosts & Shadows and Summoned To Tourney.

Los Angeles runaway Kayla Smith was living the street life: hanging out with fellow runaways, sleeping in an abandoned office complex, and navigating the crime-filled world of the '90s. But when one of her friends is gunned down, Kayla discovers she has healing powers. She heals her friend—and the gang member who shot him. Now the city's gangs seek to use her magic for crime, and she attracts the attention of evil elves.

The book can be read at Baen’s free online library: https://www.baen.com/bedlam-boyz.html