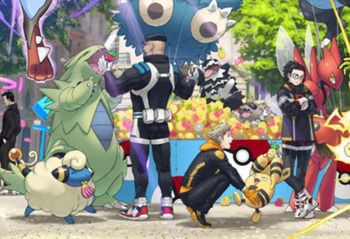 Even Team GO Rocket can play nice once in awhile.
"Maybe the most beautiful part about Pokémon GO is how broadly appealing it is - it's not closed off to a select group of hardcore fans, it's being appreciated by people from every walk of life. And in times fraught with division and in-fighting, it's a thing that seems to be beaming with positivity and inclusiveness. Whether it's friendly jostling about team allegiances, friendly reminders from local authorities, or kids setting up lemonade stands at PokeStops, it's something that's becoming universally-recognized as common ground."
— Dorkly, "8 Reasons Why Pokémon Go is the Greatest Game Ever/Most Important Game of the Decade"