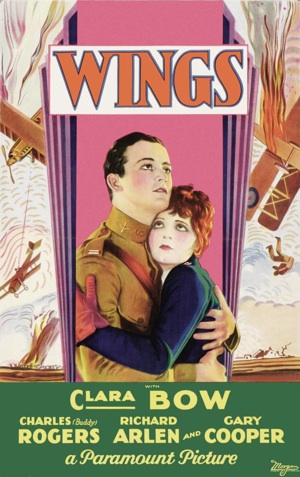 Wings is a 1927 film directed by William A. Wellman that tells a love story between two pilots, Jack (Charles "Buddy" Rogers) and David (Richard Arlen), and two girls, Mary (Clara Bow) and Sylvia (Jobyna Ralston). Both Jack and David are in love with Sylvia, and Jack doesn't even notice that Mary is crazy about him, despite the fact that Mary is played by Clara Bow. Their lives are disrupted by World War One. Notable for its realistic air battles, filmed without miniatures or rear projection (the latter hadn't been invented yet).

It's also notable for the fact that it won the very first Academy Award for Best Picture. Note that there were two categories for Best Picture in the first year. The one that's officially counted today is "Best Production," which was won by this film. The other one, "Unique and Artistic Production"—an award that was never given again after that first ceremony—was won by Sunrise: A Song of Two Humans.

For several decades, it was also the only silent film to have won Best Picture, as the first ceremony coincided with the rise of "talkies."note The first talkie, The Jazz Singer, was rendered ineligible despite coming out during the same period just so this film could win. The only other one—The Artist—won Best Picture a whopping 84 years later.

Not to be confused with the 1966 Russian film. Or the 1990s sitcom (also produced by Paramount). Or Paul McCartney's 1970s band. Or the third book in the Nomes Trilogy. Or the video game (although, like this movie, the latter has a WW1 theme).

Gary Cooper, then a rising star, has a small part as another American pilot.