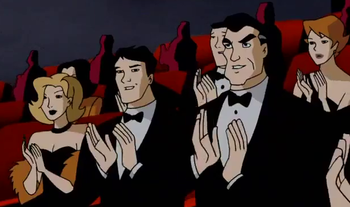 So the Coming Attractions got lots of people to watch the first episode of a new show. But is that enough to keep them watching?

Of course not. If the audience thinks your show sucks, then they change the channel and know once again to Never Trust a Trailer.

So basically you need the viewers to keep watching. While that is obvious as hell, the thing is that it's not always obvious exactly how you do it. One might think that writing a good show is how you do it, but not really. Not only does that seemingly eliminate most writers, there's also the fact that viewers have different tastes about what is good and what isn't.

This is why subjectively good writing is less important for viewership than simply getting the viewers to like the show. Thus it's a good idea to write what your audience likes. This is why so many shows are Strictly Formula.

The very beginning of the show is often crucial for this. That's why the first two to three minutes of a show almost invariably either has a hook for the rest of the show, has a large percentage of the best jokes/tensest moments/biggest explosions, or has a combination of those. This is almost always where you will find the Quip to Black.

Regardless, it's important to keep the viewers liking your show. Even it isn't immediate, you can still make the show work eventually if the suits see the potential. But that can often be harder than winning the audience over.

Also beware of Pandering to the Base.

Compare with Growing the Beard (which can also win viewers), Killer App (which wins the crowd for a system), And the Fandom Rejoiced, Win Back the Crowd (If you lost your aforementioned crowd in the past, but managed to get it back) and Moment of Awesome.

Contrast with Jumping the Shark.