Film / How Did You Get In? We Didn't See You Leave 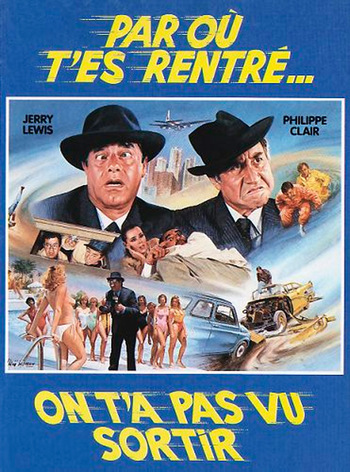 How Did You Get In? We Didn't See You Leave (Par où t'es rentré? On t'a pas vu sortir) is a 1984 French comedy film directed by and starring Philippe Clair (stage name of Prosper Charles Bensoussan).

Clovis Blaireau (Jerry Lewis) is a French private detective who is hired to spy on a cheating husband (Philippe Clair) by his wife (Marthe Villalonga). Although Clovis fails to gain any evidence that he is cheating, he does wind up becoming friends with the husband. They get involved with mobsters and flee to Tunisia. Once there they are mistaken for mobsters themselves, and get mixed up in a fast-food empire war.

This was one of two films that Jerry Lewis made in The '80s strictly for European release, they have never been released in the USA. Lewis stated that as long as he had control over distribution, they would never get a US release (no word has emerged since his passing). It was also the film debut of Connie Nielsen. Oh and, Alan Silvestri composed the score, right before he worked on Back to the Future. You read that right.

How Did You Get In? We Didnt See You Leave provides examples of the following tropes: