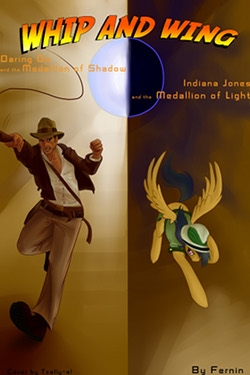 They look similar, no?
Advertisement:

A Crossover fanfic by Fernin, set in both the Indiana Jones and My Little Pony universes.

Indiana Jones is on his typical adventure. Traveling to remote mountainsides, battling Nazis and cultists, swiping ancient artifacts, and the sort. However, upon picking up this particular artifact, the Medallion of Light, Indiana Jones is sent into a strange world filled with magical ponies.

Now, with both adventure archeologists stranded in the wrong universe, how can they escape new enemies in a new environment, while still making off with the loot?