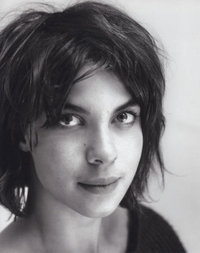 Natalia Gastiain Tena (born 1 November 1984 in London, England) is an English actor of Spanish heritage best known for her role as Nymphadora Tonks in the Harry Potter film series. She was not familiar with the series before she auditioned for the role of Tonks, but impressed David Yates with her energy, as well as by accidentally crashing into a table, much like Tonks.
Advertisement:

She is active on the convention circuit, and both sings and plays the accordion in the band Molotov Jukebox. After Harry Potter, her biggest role has been as Osha the Wildling on Game of Thrones, and her performance influenced George R. R. Martin to expand Osha's role in later books of A Song of Ice and Fire.