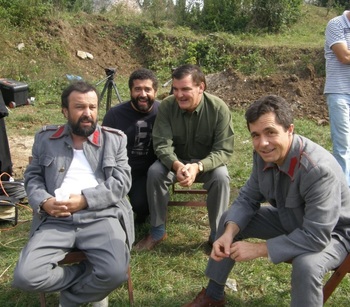 Divertis is a Romanian Comedy Group that formed in 1981 by 3 students (Toni Grecu, Doru Antonesi and Florin-Viorel Constantin). In 1987, a new member named Ioan Gyuri Pascu joined the group and performed with them in Izvorul Mureșului. As time went by the group got more and more members (Ghighi Bejan, Doru Pârcălabu, Valentin Darie, Cătălin Mieruță, Cristian Grețcu, Valentin Gora, Ioan T.Morar and Silviu Petcu to name a few).

In the 80s, the group remarked itself on the fact that they were making subtle jokes about the communist regime. They continued this kind of subtle political satire in the 90s. The group also moveed on tv and get a short lived tv show on PRO tv (1999-2001) and a new show on the rival Antena 1 for the remainder of the 2000s were they would activate under different titles (Divertis Show, Divertis Mall and Divertis Mall și Prietenii (Divertis Mall and Friends). In 2005, they would also create a satirical adult cartoon called Animat Planet Show.

In the autumn of 2011, Land of Jokes and SRC broke up with Land of Jokes leaving PRO Tv for TVR 1 under the new name of "Distractis". SRC remained however on PRO tv and was broadcasted every Wednesday at 20:30. In the spring of 2014, Divertis got another short lived show on Antena 1 first under the name of Happy Show and later known as SRC-Fun Factory.

Divertis also released several audio tapes among them being to name a few: