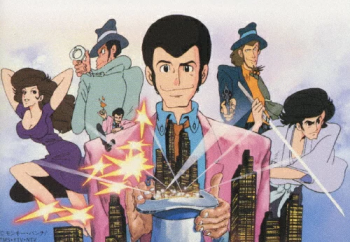 A little over three years after the end of the ultra-popular "Red Jacket" series, TMS Entertainment decided to revive Lupin III again, this time with a substantial retool on the art side.

This outing saw the titular thief dressed in a Pink Jacket, with a red tie, and aqua (sometimes blue) dress shirt. The pastel colours were just some of the changes to the art style that upset many fans upon release. The initial character designs of the Pink Jacket Series were much more grounded and gritty, bearing a greater resemblance to Monkey Punch's original sketches. Yuzo Aoki had studied the manga and wanted to do his take on the character designs rather than being based off the previous anime. Lupin and Goemon were given their traditional cleft chins, Jigen's face was more elongated and unlike other appearances his eyes were more visible, and Fujiko was made to look much more delicate and less voluptuous. Then the animation started becoming more loose yet kept the chin for Lupin, Jigen's design reverted back to covering his eyes and Fujiko was redesigned. This change was due to that Aoki wanted to simplify the character designs.

The series began airing on March 3, 1984. It experienced a very irregular release, as if TMS wanted to do a "every week" release like "Red Jacket" experienced, but had trouble getting episodes onto the TV schedule, or perhaps completed on time. The final (50th) episode aired on Christmas day (December 25th) in 1985.

Fans, when speaking of the "Pink Jacket" series, almost always imply the film Legend of the Gold of Babylon at the same time, due to the similarity in art design. Because many of the episodes share the same slapstick style of the "Red Jacket" series, this one is judged almost entirely by the art style.

This series was available only in Japan and Italy until 2013, when Hulu began streaming some episodes. The remaining episodes were added in 2015. The series is also available on Crunchyroll.

The five principal voice actors from the previous series – Yasuo Yamada as Lupin, Kiyoshi Kobayashi as Jigen, Eiko Masuyama as Fujiko, Makio Inoue as Goemon, and Gorō Naya as Inspector Zenigata – reprised their roles in this series.