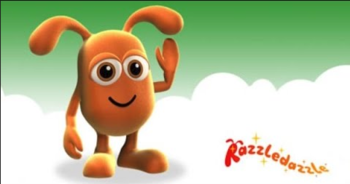 Razzledazzle is a British children's television series which aired on CBeebies for 20 episodes around 2005 and mixed CGI animation with live action. It stars the eponymous character, Razzledazzle, a vaguely rabbit-like orange thing who spends every episode making visits to four zones, each of which are entered through portal-like slides: