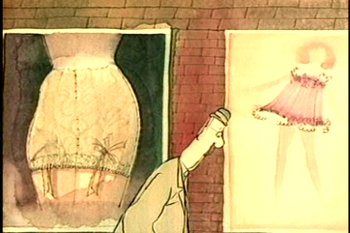 Tough to find an SFW image.

Dream Doll is a 1979 animated short film (11 minutes) directed by Bob Godfrey and Zlatko Grgic. It was a co-production of the United Kingdom and the former Yugoslavia (specifically Croatia and Zagreb Films).

The story revolves around a lonely office worker in what is eventually revealed to be London. The bald, middle-aged man, seeing apparently everyone else in the world (down to the worms in the dirt) with romantic partners, gets a blow-up sex doll. The man inflates his sex doll, a busty (naturally) blonde, but it floats away.

Despairing, the man drinks himself to sleep, then trudges in for his boring office job—only to be surprised by the sex doll, which floats into his office. This gets the man fired, but romance blooms between the man and the sex doll, which, as events prove, is sentient.