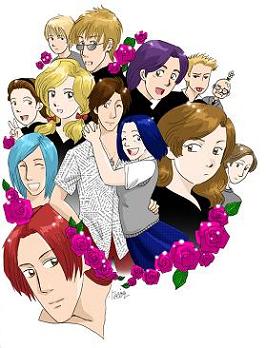 ...
"Things aren't as easy as ringing a bell."
Advertisement:

Mayuko Inadama is a Middle Schooler with, like many girls her age, a favorite Boy Band - Haruka. So when her favorite member, lead guitarist Yuuji Konno, dies in a car crash she is of course distraught. On her way back from the memorial service she finds a life size cardboard cut out of Yuuji thrown away in a back alley. Figuring somebody clearly threw it away she swipes it and shoves it in her closet as her Mom wouldn't approve.

Seems this was no mere cut out, so Mayuko discovers when Yuuji leaves the cardboard behind and manifests in ghostly form in her bedroom. It seems Yuuji has Unfinished Business he must attend to before he can 'cross-over'; and he's picked Mayuko to help him. Now she has to help him bury hatchets and make amends with people he's wronged in his life - unfortunately only Mayuko can see him.