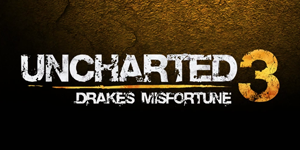 Hm, this looks exactly like...hang on, how did he manage to replace Deception...?
"Design Flaw"
—Sully (regarding suit labels and the series in general)
Advertisement:

Uncharted 3 - Drake's Misfortune is a comedy series halfway between an Abridged Series and a Gag Dub. The series was created by Ian Burke and Conor Moloney near the end of 2011, who voice the two main characters. The main idea was to re-dub Uncharted 3: Drake's Deception with satirical voice acting, but due to the extremely relaxed and usually ad-libbed creation process (which was modeled after the real voice acting in Uncharted 3), this ideal is usually not followed to the letter. In short, anything and everything are fair game for humour. You can watch the theatrical trailer here

, and all videos will be released on the Drake's Misfortune

The series is an Affectionate Parody of the Uncharted series and gaming as a whole, but the humour commonly strays into other territories such as movie references and Cluster F Bombs. As the main cast are all Irish, this can stretch believability because usually they don't even try to fake an accent. It gets worse when they actually do try. The voice acting usually keeps in character but explicit references are made very often, to the point where there is No Fourth Wall.

The script contains a ridiculous amount of profanity, thanks to the voice actors' habit of swearing at least three times per sentence. Even though the content is usually SFW, the way it is delivered is very, very NSFW.