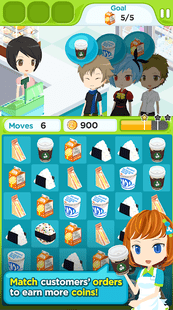 A casual match-three Mobile Phone Game from Gamenami released in 2014, Konbini Story puts players in the role of the proprietor of a konbini mart. As customers arrive with food and drink orders, players fill those orders by matching 3 of the requested snack items on the game board. Matching snacks and serving customers earns coins that are used to unlock new menu offerings and upgrade available snacks. Coins can also be used to hire "Staff Members" that grant various bonuses during gameplay, like extra turns or playtime. Levels rotate between three types of challenges:

With 300 levels spread across 3 stages, 35 tasty snacks to unlock and upgrade, and over 40 unique employees to acquire, the game offers hours of fun for players to enjoy.

While the game is still available for download, updates seem to have been abandoned by developer Gamenami — the last game update was in March of 2018, and the game's facebook page