Series / Root of All Evil 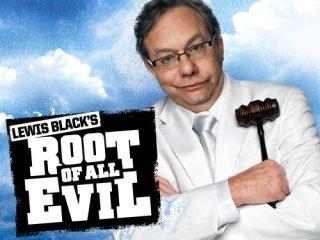 A Comedy Central show in which two people, pop-culture phenomena, objects or whatever else are put on "trial" to determine which is the titular Root of All Evil (of that week). Examples; Kim Jong-il vs. Tila Tequila, Beer vs. Weed, Oprah vs. the Catholic Church, Disney vs. Scientology.

The format of the show is Lewis Black playing the "judge" of the court and two rotating comedians play "lawyers", each arguing that the other's subject is more evil than their own.

Not to be confused with the documentary by Richard Dawkins, The Root of All Evil?.

Alternative Title(s): Root Of All Evil