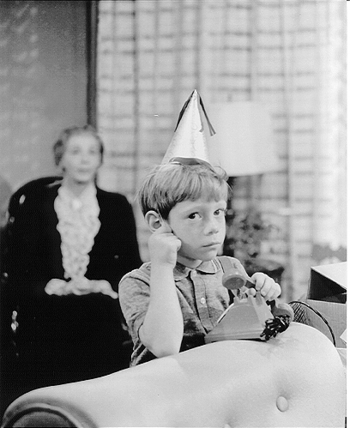 "No, I'm not the kid from 'It's A Good Life.'"
Rod Serling: As must be obvious, this is a house hovered over by Mr. Death, an omnipresent player to the third and final act of every life. And it's been said, and probably rightfully so, that what follows this life is one of the unfathomable mysteries, an area of darkness which we, the living, reserve for the dead—or so it is said. For in a moment, a child will try to cross that bridge which separates light and shadow, and, of course, he must take the only known route, that indistinct highway through the region we call the Twilight Zone.

Billy Bayles (Billy Mumy) and his grandmother (Lili Darvas) are very close, and so he is sad when she dies. Then, however, he begins to say that Grandma called him on his toy telephone and wants him to visit. At first, the parents ignore this as the ramblings of a child, but events will soon force them to see that the truth is far more sinister. It seems that Grandma is lonely in the afterlife, and she using the telephone to talk Billy into joining her. Billy attempts to kill himself several times; when he tries to drown himself in the family's fish pond and is on the verge of death, his father Chris (Phillip Abbott) grabs the phone and begs Grandma to let Billy grow up and experience life... which she does. To his parents' relief, Billy recovers completely.

Rod Serling: A toy telephone, an act of faith, a set of improbable circumstances, all combine to probe a mystery, to fathom a depth, to send a facet of light into a dark after-region, to be believed or disbelieved, depending on your frame of reference. A fact or a fantasy, a substance or a shadow—but all of it very much a part of The Twilight Zone.