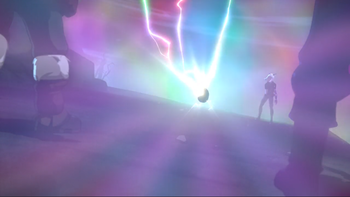 The heroes are besieged by a monstrous spider that could wrap them up in its webs. Ezran figures out that it's not a real spider, since he can speak to animals and spiders don't sound like that. He proves it by walking up to the creature and shouting right back it without any harm coming to him. Callum apologizes for not taking his claims of being able to speak to animals seriously.

The group makes it to the tree and promptly find out that the "miracle healer" is no such thing. Rather, the woman who met Ellis is the Sky Elf Lujanne, Guardian of the Moon Nexus, an illusionist who resides on the Cursed Caldera. She keeps the Moon Nexus safe by casting monstrous illusions around the mountain. Lujanne informs them that the only thing they can do for the egg as this point is to hatch it. Since Sky Dragons can only be born in a storm, Callum breaks the Primal Stone, releasing a thunderstorm that causes the egg to hatch into a baby dragon named Azymondias. The dragon quickly befriends the heroes and severs Rayla's wrist binds.

Soren and Claudia make it to the top of Mount Katolis. Claudia is able to cast her tracking spell, alerting both the siblings and Viren, all the way back at the castle, to the heroes' location.