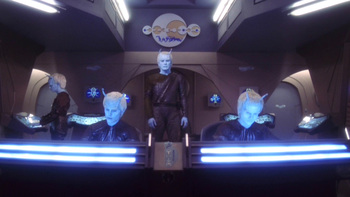 Going it alone in the Expanse is pretty rough, but this is probably not the kind of help Archer was hoping for.
Shran is under orders to find a ship in the Delphic Expanse. His lieutenant, Talas, notes that they've lost the warp trail, and since it's been weeks, she thinks they're dead. Shran, however, is sure they're alive, and reveals that it's a human ship (telling her not to underestimate the "pinkskins"). Degra has an impromptu meeting with the rest of the Xindi Council, where he reveals that the primary weapon isn't ready yet.
Advertisement:

Enterprise is in pursuit of the Xindi weapon, and T'Pol and Hoshi managed to reconstruct 30% of the database that was deleted by D'Jamat. The weapon is inside a large "anomaly field", which they can't go around, so Archer orders them through. A large anomaly surrounds the ship and nearly destroys it, but then another ship gets out a tractor beam and pulls them to safety. Archer hails the ship to thank his savior, but is shocked to see that it's Shran.

He boards the ship and explains that he came to help them out with the Xindi, but phrases it in a way that paints the Vulcans in a bad light. Archer accepts Shran's offer, thinking that he may not have a choice. Archer tells Malcolm in the armory that Shran's tactical officer is coming to assist, and Malcolm is reluctant but accepts. When the Andorian ship docks, T'Pol suggests having security teams for every repair team, but Archer thinks that'd be too inefficient. He admits to not trusting Andorians in general, but feels Shran is an exception.

While Trip and Malcolm are eating in the mess hall, Talas enters and loudly asks everybody who Malcolm Reed is. When she meets him, she reports for duty, but complains that she doesn't want to be there and insults both Malcolm and Trip. Trip leaves and goes to engineering, where T'Pol is, and tells her that the repairs will be completed within twelve hours. He also notes that he hasn't seen her outside of neuropressure and wonders if she's been avoiding him, but she claims she's just busy.

Shran joins Archer for dinner and they drink ale together. Shran claims he got volunteered and talks about the possibility of a human/Andorian alliance. Meanwhile, Malcolm and Talas are working in the armory, but they're not getting along. After the repairs are complete, the Enterprise heads off with Shran on the bridge and they arrive at the Calindra system, where four Xindi ships are.

Archer, noticing the damage to the moons, concludes that this area is a proving ground. He and Shran agree that it's too dangerous to go in without more information. Shran decides to go back to his ship, but on his way, he bumps into Trip, who wants an antimatter injector. Shran isn't sure about giving away sensitive information, then he points out that both of them have had siblings die. A tearful Trip says that he doesn't want revenge, just to stop the Xindi. Shran leaves, but promises to give Trip the injector.

Degra, who is now ready to test the weapon, contacts the rest of the council. He launches the ship, but cancels the test when a proximity alarm goes off. It's Shran's ship, and he hails Degra, pretending to be a miner. Degra tells him to stop scanning the weapon and leave, or he'll fire. Shran ends the communication and the Kumari (which Archer and T'Pol are on as well) returns to the Enterprise. Archer, T'Pol, and Shran look at the information and conclude that the weapon is similar to the one that attacked Earth, but not powerful enough to destroy a whole planet. They note that it doesn't really need to be destroyed, but they could measure its results, and Archer decides to steal it.

Malcolm and Talas get to work and they talk about their military upbringings, then the Enterprise crew watches the Xindi cut a moon in half with the weapon. This disappoints the Xindi Council, since they wanted the moon to blow up instead. Degra wants time to analyse the data, but Dolim is mad at him for all the setbacks. Archer wants to beam the failed weapon to the launch bay, but T'Pol doesn't want him to because it's emitting radiation. Shran offers to store it in his cargo bay (which is apparently better sealed) until it's safe, but Archer is suspicious that Shran would be that noble. Eventually, he accepts, but only if Archer can command the Kumari during the retrieval.

Malcolm and Talas, now getting along better, are progressing well with their work and have gotten the phase cannon up to 94%. Shran, on his ship, has a conversation with an Andorian general, asking if it's really okay to make enemies with the humans, wanting to be an ally instead, but the general dismisses him. The Enterprise damages the engines of two Xindi ships and the Kumari takes the weapon.

Archer orders the Kumari to rendezvous with Enterprise, but then Shran ends his cooperation and leaves for Andoria, apparently wanting the weapon for himself. Archer is angry, but Shran tries to defend himself, saying that the Imperial Guard wants the weapon to defend against the Vulcans. Archer declares he and his crew will fight for it, but Shran reveals that Talas sabotaged the sensors. Archer punches Shran in the jaw, then Shran orders Archer put in an Andorian escape pod, while the Andorians scan the weapon.

The Enterprise collects Archer, then Malcolm reveals that he caught Talas in the act and her sabotage was unsuccessful. The Enterprise catches up with the Kumari and Archer reveals that T'Pol has decrypted the weapon's arming protocols and threatens to detonate it. Shran thinks this is a bluff, but after a bit of back-and-forth, he does it anyway. Shran jettisons the weapon and it explodes.

The Enterprise is undamaged, but the Kumari sustains heavy damage. Archer offers help but the Andorians refuse and "limp" away. Afterwards, the Andorians send Archer a covert transmission, containing scans of the weapon, so Archer orders them sent to Starfleet.

tropes in this episode include: