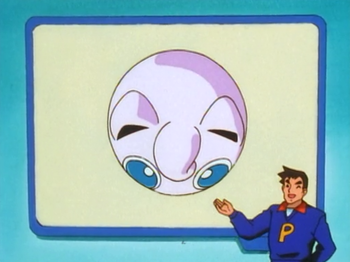 And the worst part is that it's a complete lie

Ash signs up to take an exam to be admitted to the Pokémon League. But judging by his awful score on the multiple-choice quiz, it may be a trivial pursuit. He enters the battling portion of the test hoping to raise his score. Also taking the test are Jessie and James, disguised as nerdy students. But the dastardly duo won't stand for doing anything the honest way, and they each get expelled from the test. Ash battles the instructor with a set of three Pokémon randomly assigned for the test. They turn out to be an Arbok, a Weezing, and a Meowth. What were the chances? Ash knows the Poison-type Pokémon's attacks pretty well from being on the receiving end of them so often. He fights a good match, but loses in the end. Just then, Team Rocket bursts in with the Pokémon James was given for the test. These powerful Pokémon will help Team Rocket nab all the Pokémon at the testing facility—or so it thinks. The Pokémon are obedient to the instructor who trained them, and they turn on Team Rocket. With a little help from Ash, Team Rocket is sent blasting off again. The testing instructor offers to let Ash take the test again—he's sure Ash can pass this time—but Ash would rather enter the League his own way, by traveling, collecting badges, and seeing all the world of Pokémon has to offer.

Jigglypuff seen from above

An infamous trick question from an early episode of the Pokemon anime.

Jigglypuff seen from above

An infamous trick question from an early episode of the Pokemon anime.