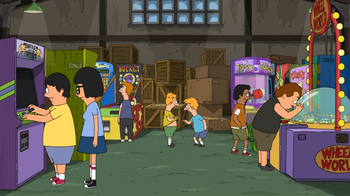 "This is your crew?"
"I am going to teach you how to beat these games."
—Mr. Fischoeder

The Belcher kids and company team up with Mr. Fischoeder to win a dune buggy from Family Funtime. While Bob and Linda get a chicken from Teddy.