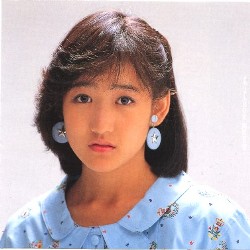 Yukiko Okada (Born as Kayo Satō; August 22, 1967 – April 8, 1986) was a Japanese idol singer in the 1980s. She was a winner of the talent show, Star Tanjō! (essentially a Japanese predecessor to American Idol) and pretty much after that, the rest is history.

Known as "Yukko" to her fans, Okada debuted with the single, "First Date" on April 21, 1984. Her 1986 single "Kuchibiru Network", reached number one on the Oricon weekly singles chart dated February 10, 1986. She was on her way to becoming a star and had she continued, would've been as big a star as Seiko Matsuda; another idol singer who was also very popular in her time. Yukiko would've always been remembered for her simple voice and being cute, petite, and innocent.

Sadly, on April 8, 1986, Okada was taken to hospital after being discovered in her apartment with a slashed wrist. Hideyoshi Aizawa, the founder of Sun Music, picked her up from the hospital, and she asked to be taken to the office. However, as soon as she was left alone, she ran to the roof and jumped, dying instantly.

Information on Okada is sparse in the west as her time was obviously before the rise of the internet, so if you have some time to spare, a 3-part fan documentary entitled "KANASHII YOKAN: The Life and Legacy of Yukiko Okada" chronicling Okada's entire life can be found here

It's now been over 30 years since her death, but Yukiko's memory is still fresh in peoples mind. On April 8 every year on the anniversary of her death, fans gather and lay a memorial for her, both on her grave and on the spot she died, proving that even though she is gone, she will never be forgotten.