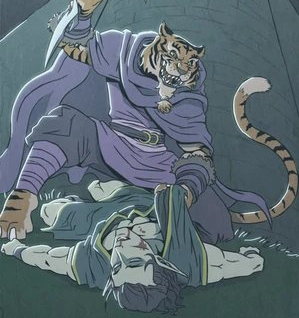 of Hotis by Hugo Cardenas

.
"More troubling to us must be the fact that this regime chose to swat an internal problem with a weapon of mass destruction in a way that we would surely know what had been done. As is the case with the Chinese population, we are meant to take away from this a sense of abject horror and fear: an understanding that this regime is capable of anything. And while the Chinese people, locked within the fortress created by thirty years of Communist rule, must grovel in fear to this insanity, we are now no less immune. We may not live under this Lesser Mao, but we could as surely be the victims of his madness should the whim strike. The man has made himself the master terrorist of the Earth through this single act."
—Richard Nixon on Mao Yang-jin, better known as the Lesser Mao, Fear, Loathing and Gumbo on the Campaign Trail '72

Web Originals come in many forms, and are not bereft of heinous villains.