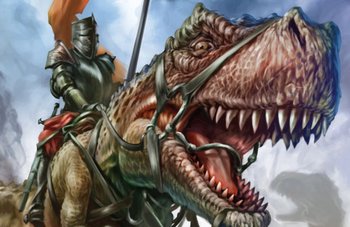 See, this is what Jurassic Park should've done.
Roy: But the rooster was determined to get it back with the aid of his trained dinosaurs!
Orson: Trained dinosaurs? Where did the trained dinosaurs come from?
Roy: Same place all those ninjas came from.
— U.S. Acres, "The Name Game"
Advertisement:

Note that just because a series provides a reason for there to be dinosaurs does not mean it isn't an example of this trope. Sure, a dinosaur altmode might very well be a good idea for a Transformer, but the real reason for a dinosaur form is to appeal to young boys (also compare Kids Love Dinosaurs). Domesticated Dinosaurs may also count, as characters having a dinosaur as a Cool Pet is undeniably awesome.

Despite the name of this trope, it can cover examples that are not technically dinosaurs. Other extinct reptiles, like pterosaurs and plesiosaurs, would fall under this trope. And while it may be a stretch, since we don't have individual tropes for Everything is Better with Woolly Mammoths/Woolly Rhinos/Saber-tooth Cats/Dimetrodons/etc., these examples would get grouped here.

See also Dinosaurs Are Dragons (in which case this trope overlaps with Our Dragons Are Different) and Artistic License – Paleontology. Compare Dinosaur Media. Medieval Prehistory will often overlap with this trope as well, since it usually just adds dinosaurs (or other palaeofauna) to what is otherwise a Standard Fantasy Setting.

Taxonomic evidence makes this a supertrope to Clucking Funny, Everything's Better with Penguins, Hippogriff, Noble Bird of Prey, Our Gryphons Are Different, The Owl-Knowing One, The Phoenix, Pirate Parrot, and Swans A-Swimming.