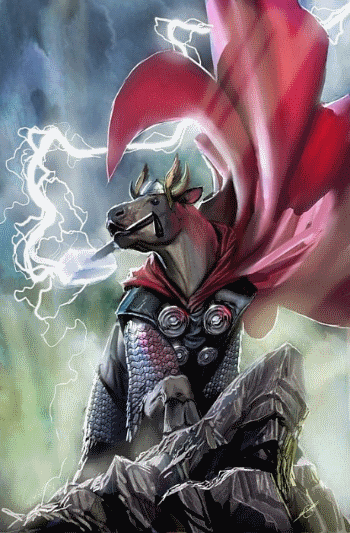 Marvel Comics: Milking their titles for all they're worth! groan... Now that's what I call a moo-perhero! A bo-divine! Better watch out for the legendary hammer, "Moo-lnir", which can udder-ly destroy its enemies until they cow-er in fear. It's faster than a speeding bull, stronger than a loco-moo-tive, and able to jump over the Moo-n in a single bound.
"Once upon a time and a very good time it was there was a moocow coming down along the road and this moocow that was coming down along the road met a nicens little boy named baby tuckoo"
— The opening to A Portrait Of The Artist As A Young Man by James Joyce

Who knows why people love cows? They stand around and moo. They make milk whenever we want them too (in fiction at least). And yet, people love 'em. Some people love 'em enough to put 'em into their works regardless of appropriateness, just because they think cows are awesome.

This trope is about female bovines inserted into a work of fiction without any actual purpose or logical explanation, except for the Rule of Cool or Rule of Funny.

Note: This trope is not a list of your favorite works featuring cows. Nor is it a list of all cow jokes in fiction. It's about gratuitous cows.

Compare Garnishing the Story. Sometimes overlaps with Drop the Cow. See also Aliens Steal Cattle and Cow Tipping. If you were looking for minotaur-esque critters (Man-Cows), check out A Load of Bull. Contrast Brutish Bulls, for much more negative portrayals of fictional cattle. Not really related to You Fight Like a Cow (but it's a fun mental image, isn't it?)