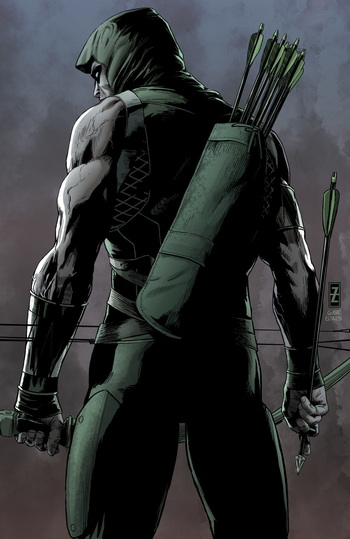 "See him riding 'cross the plain
See how everybody fears his name
He's working for the good in
The mountains and the wood
Protector of the lame
Straight arrow is his name"
— Spirit, "Straight Arrow"
Advertisement:

Archers are skilled bowmen. Generally independent and used to working alone, this tends to make them practical, a little haughty or arrogant and not the best at following orders, especially from those they don't respect. Due to the nature of their weapon, archers are typically stealthy and graceful and tend to fight at a distance. As a result, they're often portrayed as vulnerable to close-quarters combat unless they switch to a different weapon.

Archers are most likely to be found in a wild, untamed setting and can share traits with the Cold Sniper, most notably an analytical and calculating nature. This archetype tends to be depicted as having a more slender build despite the great upper-body strength required to draw a powerful bow without mechanical assistance.note Far more, in fact, than that required to use a sword, with few historical swords, even two-handers, weighing more than a few pounds, whereas a credible war bow would have at least 70lb draw weight, with the most prolific surviving medieval longbows having more like 140lb. These characters are likely to also be The Chick, a Nature Hero, a Forest Ranger, a Badass Native, and/or an Elf. This also has the benefit of keeping the delicate female safely out of the bone-crunching melee.

Ironically, the nature of of your typical bow meant that, historically, archers were actually big, strong, and powerful, as a bow often required both a great deal of strength and extensive conditioning to use properly. In fact, most archers could be very effective in melee, and the main reason they didn't prove as effective in close combat was because they didn't have the money to afford the heavy armor or the lifetime of combat training that an elite warrior aristocracy could manage.

This trope is distinct from Master Archer, which describes a character who is an extremely skilled archer; the Archer Archetype may be no more than competent — it's the independence and association with wilderness that define the trope. For bows used in modern or scifi settings, see The Straight and Arrow Path. For added irony, check out No "Arc" in "Archery". See also Annoying Arrows. May evoke comparisons to Robin Hood. (Though if he robs the rich to give to the poor, that's a different trope.)

Not to be confused with the comedy show Archer, nor the recurring character title in the Fate Series.