Literature / The Diary Of A Nobody 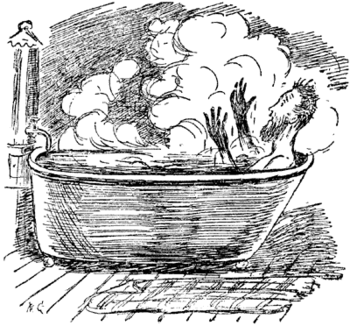 Why should I not publish my diary? I have often seen reminiscences of people I have never even heard of, and I fail to see—because I do not happen to be a 'Somebody'—why my diary should not be interesting. My only regret is that I did not commence it when I was a youth.

A comic novel by George Grossmith with illustrations by his brother Weedon Grossmith, written in the form of a journal. It first appeared in 1888-89 as an occasional serial in Punch, and an expanded version appeared as a book in 1892.

Mr Charles Pooter, middle-aged Victorian Everyman and clerk in the City accounting house of Mr Perkupp, chronicles fifteen months in his life from the time he and his wife Carrie move into a new suburban house in North London. In that time the socially awkward Mr Pooter experiences mishaps, misunderstandings, insults and humiliations. He is taken advantage of, he worries about his terribly modern son and the fast company he keeps, and he is generally dogged by misfortune. It may be one of the funniest books ever written.

It has been staged and filmed many times, including a silent film version by Ken Russell and Mrs Pooter's Diary, a play telling the story from Mrs Pooter's point of view by Keith Waterhouse for Judi Dench and her husband Michael Williams.