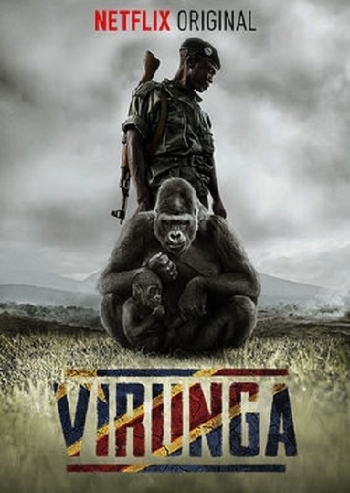 Virunga is a 2014 documentary feature directed by Orlando von Einsiedel.

It is about conservation efforts at Virunga National Park in the Democratic Republic of the Congo. The film focuses on three workers at the park: chief warden Emmanuel de Merode (a white man from Belgium), central sector warden Rodrigue Katembo, and Andre Bauma, a caretaker at the gorilla refuge. A fourth character getting lots of screen time is Melanie Gouby, a French journalist.

At first the main threat to the park seems to be poachers, who are a plague on the wildlife, killing elephants and the critically endangered mountain gorilla. However, other threats soon emerge. There is the matter of Soco International, a British petroleum company that wants to drill for oil in the park, something that surely will do incalculable damage to the park itself and the lake on the park's northern border. And an immediate threat blows up in the form of MS 23, a rebel army fighting against the Congolese government. The see-saw nature of the war between the government and the rebels soon finds MS 23 bearing down on the park itself.