Film / The Mystery Of Henri Pick 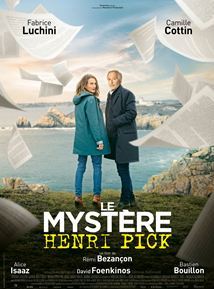 Surprisingly she helps him

The Mystery of Henri Pick (Le Mystère Henri Pick) is a French comedy from 2019 directed by Rémi Bezançon, based on the novel by David Foenkinos.

While visiting a small town, Daphné Despero, who works for a publishing company, hears about a library of a special kind: it features a collection of rejected books, that failed to be published. As she visits that library, most books look very bad, but she finds a very interesting one. The author is Henri Pick, a pizza chef from a local restaurant who died two years ago. In fact his widow isn't aware that he would write, but an old typewriter is found in the restaurant's cellar.

Daphné manages to have the book published; it is quite successful.

Jean-Michel Rouche (Fabrice Luchini), a famous critic, doubts that Henri Pick wrote the book. He causes a scandal on television then searches for the real author. Surprisingly, Joséphine Pick (Henri's daughter) ends up helping him.

The Mystery of Henri Pick contains examples of the following tropes: