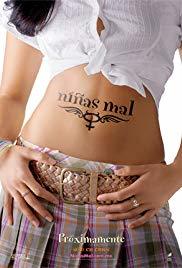 Niñas Mal, released in the United States under the title Charm School, is a 2007 Mexican movie about Adela León (Martha Higareda), the rebelious teenager daughter of a politician. Since her behaviour is ruining his political career, his father decides to send her to an boarding school in which she will learn to behave like a lady. Mayhem of all kinds ensues while she's on the school. When she comes out, it gets even worse.