Fanfic / Requiem For An Adventurer 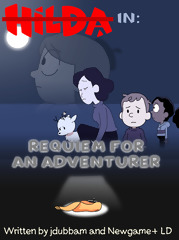 Requiem For An Adventurer

is a Hilda Alternate Universe Fic by authors jdubbam and Newgame+LD, exploring one simple question: What if, in Hilda's rush to free the captive baby Weather Spirit

Their lives forever uprooted, Hilda's friends and family struggle to get by as circumstances wind up pulling them into a plot greater than any of them could have imagined — one that could very well spell doom for all of Trolberg.

Requiem For An Adventurer provides examples of: