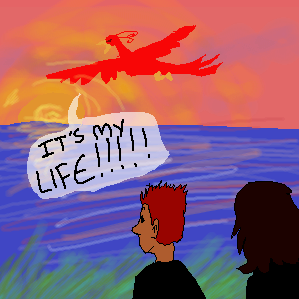 is a classic So Bad, It's Good Harry Potter fanfic, posted on Fan Fiction Dot Net by Genkai Lady

The story is a rewrite of the end of the fifth book, Harry Potter and the Order of the Phoenix, namely the scene in which an enraged Harry trashes Dumbledore's office. In the canon scene, Dumbledore eventually convinces him to calm down. In this version, Harry does not calm down. Instead, he jumps out the window, turns into a phoenix for some reason, and flies away. And that's the whole story. It's only 535 words, including the author's note and I Do Not Own disclaimer.

Despite its brevity, it apparently took three people to write this story, the author's note citing contributions from her friends Susannah and Sarah. The author's note also says they got the idea for the story from listening to the Bon Jovi song "It's My Life." The story's infamy occurred following its discovery

by the anti-Mary Sue LiveJournal Pottersues in 2006.