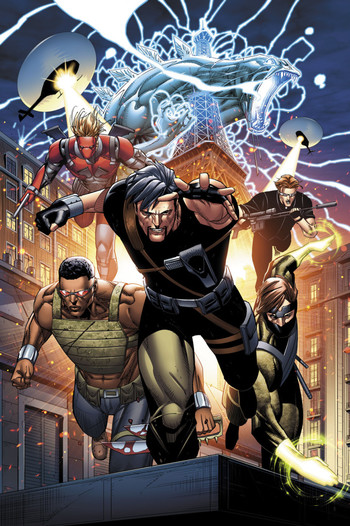 Written by Richard Meyer with art by Jon Malin (pencils), Brett Smith (color), and Ethan Van Sciver (cover and additional art), Jawbreakers is a series of indie graphic novels that focus on a retired team of ex-superheroes who now find work as mercenaries.

The first volume of the series, called Jawbreakers: Lost Souls

was available to fund on Indiegogo in 2018. It held for a few months the record for a crowdfunded comic book, raising the then-unthinkable sum of over $400,000 note To get a sense of the scale of this achievement, before Jawbreakers, crowd-funded comics very rarely broke past $10,000 and were considered a scandalously roaring success if they approached the $50,000 mark.. The final amount covered several times over the original goal, and the finished product was shipped to the project backers in February and March of 2019.

The initial volume was followed in 2019 by Jawbreakers: Gød-K1ng

, and later in 2020 by Jawbreakers: Grand Bizarre

, both also funded on Indiegogo.