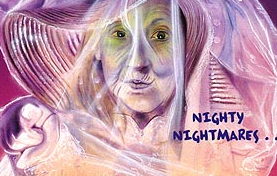 Zack's new teacher, who turns out to be a ghost who wants to teach him... in the grave.