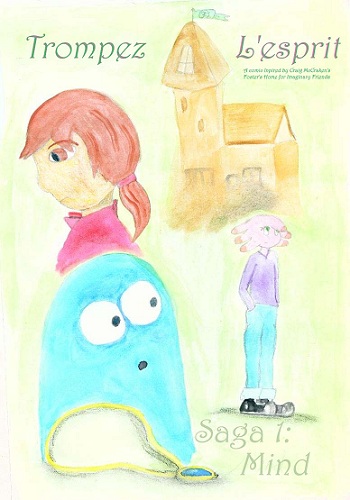 . It takes place several years after the original show, where life for imaginary friends hasn't exactly gotten brighter. All imaginary friends are now under heavy supervision and are required to be chipped by their owners, those who aren't are taken in by the newly-formed Bureau for Imaginary Control. The BIC began their rampage with Foster's, claiming the house needed to be put under quarantine and taking many imaginary friends and even Frankie into custody. Despite fighting back, very few were left, and those who were (Mac, Bloo, Mr. Herriman, Madame Foster, and a small handful of imaginary friends) were forced to hide out in a bomb shelter for the next several years.

The main protagonist is Kate, a young imaginary friend who has been suffering the same dream over and over again. Not only that, she also notices she's not quite like the other imaginary friends, as she grows and matures like a human child and doesn't remember her creator. After Mr. Herriman, while lecturing her, accidentally slips up and nearly reveals a well-hidden secret, Kate becomes convinced there's something more to her than the others are letting her in on, and she begins asking questions and investigating. Seeing how much it is upsetting her, Mac, who is now a young man, finally reveals the truth of her past, that she is actually the half-human daughter of Wilt and Frankie, and the BIC was after her specifically. Desperate for more answers, Kate, along with Mac and Boo, sets out into the real world, but things don't go as simply as they may have hoped and they end up on the run from the BIC with even more questions than before. Later on Jake Derbihill, a detective, and Betsy, another imaginary friend join the trio. Together, the group searches for answers about Kate's past and the friends who were taken by the BIC.

. Unfortunately, it hasn't been updated since 2009 and may very well be considered an Orphaned Series by this point.