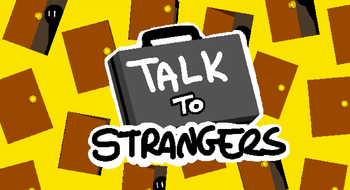 Talk to Strangers is an indie game of everyday survival developed and published by Post Mortem Pixels in 2019 on Steam. It was created with Stencyl

In the game, you play as a salesperson working for a company called "Sunny Mornings", and must go from door to door, having conversations ranging from bizarre to mundane (in this order) while trying to sell products to strangers. To beat the game, the player must survive a week as a salesperson and meet a daily quota of sold items.

There are a total of 16 houses you can visit throughout the week, all of which with their own unique quirks and secrets. The dialogue of each house will change throughout the day, which will force you to come up with different selling strategies.

Talk To Strangers contains examples of: