We can't lose anyone else... Not like we lost Father!
—Gladion trying to reason with Lusamine

Please refrain from adding spoiler markup to these subpages. Read with caution! 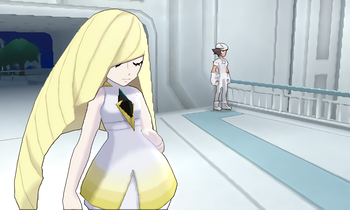 Poor Lusamine...Explanation  Being reunited with the love of your life, only to find out that he doesn't remember you or his past life, and then letting him go for the sake of his happiness, poor lady. That said, Mohn intends to meet her again.
Advertisement: