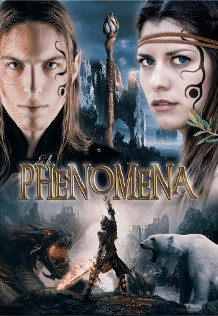 Promotion Poster
Back in January 2012, it was announced that Phenomena would get a movie. Very little news was given, other than a short and still unupdated synopsis on Filmed Imagination

appeared on Twitter. He announced that he wanted it to be a Live Action TV-series. After much development, it tried to gain funds on American Film Market

with a description and promotional poster this time. Due to the lack of news, it seems like this was a failed attempt as well, probably because of both the bad promotional poster and the bad description of the series making it seem like a Cliché Storm. After 3-4 years of development, one can say it has entered Development Hell, for the fans at least.

The description can be read here

Tropes that can be seen so far: